For my third seismometer, I wanted something sensitive and a step up from the usual amateur fair, as I already had two – the Lehman and my AS-1 copy.

I had heard about a newcomer to the scene – the Volksmeter II – which employed a different type of sensor. After waiting months for the company to start production, I ordered one.

It came in a rather large box, but was very well packaged. 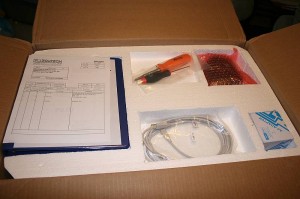 Above you can see the instruction manual, multi-tool for adjustments, USB cable (I actually am running it via RS-232), power adapter and GPS location and time reference (in the orange bubble wrap). 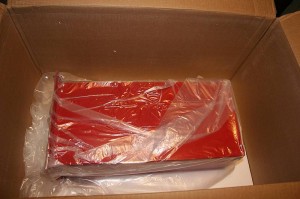 Above is the Volksmeter II still wrapped and on it’s side. The bottom is on the left.

Setup was somewhat time-consuming, but easy. It consisted of aligning the sensor plates and then VERY carefully adjusting the leveling screws. Remember, this sensor is, in addition to being a seismometer, also a tiltmeter. Believe me, it really is sensitive enough to measure the tilt of a human hair under a football field.

Currently, it is silently performing it’s duties in my crawl space. If you see the graphs and wonder why there may not be a tracing for one or both of the “raw” channels, it is because the sensor has tilted too much one way or another. This is especially severe for the north-south sensor. I have on multiple occasions re-leveled the sensor. But, it would seem that I don’t have a lot of concrete in the crawl-space slab, and everything from seasonal heating to barometric pressure causes it to tilt. Maybe someday I’ll get in there and pour an isolated pier.

You may also notice that on the tracings that they are sometimes smooth, and sometimes they are really rough. That is due to weather. When a front comes through, things really get active. Again, this is likely from my lack of a pier. Oh, to have a pier on bedrock!

I will eventually try to get a picture of the sensor in the crawl-space. I would also hope to build a styrofome shell to limit thermal noise.

The Volksmeter II can be purchased from RLL Instruments. They are very friendly and have been of great assistance with setting up the instrument.